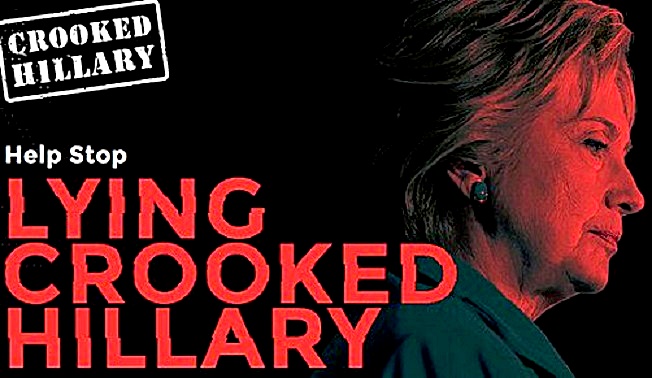 These are the same people who told America in 2012 that the Benghazi Islamic terrorist attack that killed FOUR Americans was the result of an obscure Youtube Movie trailer. That was a lie fabricated to make sure Barack Hussein Obama was reelected. It was a cover-up in part to make Obama/Crooked Hillary Foreign Policy and Clandestine decisions to make them appear competent rather than inept.

I gotta tell you. Crooked Hillary’s condescending and vague accusation against Russia to make Donald Trump look nefarious brought me back to the Benghazi Lies of 2012. At this point the difference Crooked Hillary’s accusation is probably a Benghazi-like lie. A LIE TO GET ELECTED President of the United States!

These Leftist Dems will say anything to get elected to any Office.

It has come my attention a former British Ambassador – Craig Murray – that lost his British diplomatic job with the UK government for “exposing the UK government’s knowing use of intelligence obtained from suspects who had been tortured by the Uzbekistan Government,” is vouching for Wikileaks that the hacked emails did NOT COME from Russia. AGAIN! The Dems are lying to win the election. The Dem lie has the complete cooperation of America’s Left Stream Media who are not focusing on the Wikileaks exposing just how nefarious Crooked Hillary and the Dems truly are.

My fellow American voters, DO YOU WANT CROOKED HILLARY TO BE POTUS KNOWING SHE AND HER DEMS ARE THIS CORRUPT? REALLY?

Everything Crooked Hillary says she will do to benefit Americans at worst is a nefarious evil lie with another agenda she desires to be hidden. At best whatever Crooked Hillary speaks to Americans is well-meaning deception to bring America into a disastrous transformed Leftist utopia that tears up EVERYTHING the Founding Fathers put on paper that would lead America to become great.

MY GOD DEAR VOTERS – VOTE TRUMP TO GIVE AMERICA A CHANCE!

Below is the Constitution.com article about Craig Murray denying the Dem-line that Russia is behind the hacking thorn in Crooked Hillary’s side.

Breaking! British Politician says Russia has NOTHING to do with the DNC Email Leaks!

Former British Ambassador Craig Murray is an ally and friend of WikiLeaks founder Julian Assange and he visited Assange in the Ecuadorian Embassy on Wednesday to discuss his ongoing plight. What Murray learned could have a huge impact on the 2016 election, if the American people are allowed to hear it.

One of the main media arguments for people not to give credence to the hacked DNC, Clinton emails is that this is a deliberate attempt by Vladimir Putin and Russia to impact our electoral process. The narrative goes something like this; ‘Russia illegally hacked the DNC and are now trying to steal the election from Clinton. So Republicans shouldn’t use the ill-gotten information, the media shouldn’t report on it, and the American people shouldn’t pay attention to it. In that way, we’ll be standing up to the tinpot dictator Putin.’ The only problem with this is that it means we should all completely ignore the criminality and corruption at the DNC and in the Clinton campaign team! It’s a stupid argument, but it’s become so prevalent that even some conservatives are parroting it.

VIDEO: Breaking British Politician says Russia has NOTHING to do with the DNC Email Leaks – The Constitution [ORIGINALLY LIFEZETTE]

Here’s the thing… there’s no proof that Russia did any of this. They’ve never admitted to it, and our intelligence community has never proven it. It’s simply a theory that the media and the Clinton team have implied is fact.

Well, Ambassador Murray is here to dispel the rumors and to clear the air. Vladimir Putin and Russia had nothing to do with hacks on the Democrats, nor with the release of the hacked emails.

Here’s what Ambassador Murray had to say from his personal website:

I left Julian after midnight. He is fit, well, sharp and in good spirits. WikiLeaks never reveals or comments upon its sources, but as I published before a fortnight ago, I can tell you with 100% certainty that it is not any Russian state actor or proxy that gave the Democratic National Committee and Podesta material to WikiLeaks. The claim is nonsense. Journalists are also publishing that these were obtained by “hacking” with no evidence that this was the method used to obtain them.

The control of the Democratic party machinery deliberately to unfairly ensure Clinton’s victory over Bernie Sanders is a matter of great public interest. The attempt by the establishment from Obama down to divert attention from this by a completely spurious claim against Russia, repeated without investigation by a servile media, is a disgrace.

The over-close relationship between the probable future President and Wall Street is also very important. WikiLeaks has done a great public service by making this plain.

The attempts by the mainstream media to portray WikiLeaks as supporters of Trump and Putin because they publish some of Clinton’s darker secrets is completely illogical and untrue in fact. The idea we must pretend Clinton is a saint is emetic.

But the key point is that WikiLeaks is a publisher. It is a vehicle for publishing leaks, and is much more of a vehicle for whistleblowers than for hackers. It does not originate the material. I have often seen comments such as “Why has WikiLeaks not published material on Israel/Putin/Trump?” The answer is that they have not been given any. They publish good, verifiable material that they are given by whistleblowers. They are not protecting Israel, Putin, or Trump. Nobody has given them viable material.

Did you get that?

Ladies and gentlemen, please don’t buy the media/establishment spin on the WikiLeaks releases. This isn’t about Russia, or hacking, or anything like that –

This is all about how the Democrat Party is corrupt, anti-democratic, and very likely criminal.

This is all about how the media has been complicit, not only in the crimes of the Democrat Party, but in covering up their crimes as well.

This is all about how liberals will literally do whatever it takes to win. In their minds the ends always justify whatever dastardly means must be employed to ensure victory.

This is all about how the American people continue to have their rights stripped away from them by a bloated and corrupt government.

Don’t let them get away with it.

Breaking! British Politician says Russia has NOTHING to do with the DNC Email Leaks!

Onan is the Editor-in-Chief at Liberty Alliance media group. He’s also the managing editor at Eaglerising.com, Constitution.com and the managing partner at iPatriot.com. Onan is a graduate of Liberty University (2003) and earned his M.Ed. at Western Governors University in 2012. Onan lives in Atlanta with his wife and their three wonderful children. You can find his writing all over the web.

Copyright © 2016 The Constitution. All Rights Reserved.

3 thoughts on “Russia Hacked Emails like a Movie Caused Benghazi”