I have noticed over the years that Lefties (aka Liberals, Progressives, Left Wingers, Moonbats, etc.) have smeared Conservatives as Nazis or Hitler-equivalents. The irony is Hitler’s Nazism was a Left Wing Movement that employed the nationalist-corporatism of Fascism which is ultimately State control of the industrial complex.

Karl Marx’s Communism envisioned Industrial workers rising up in revolt over the means of production and who controls those means. Which ultimately played out of State ownership of everything from property to the industrial complex under the illusion that the people (aka workers or the proletariat) controlled society’s living conditions and the mode of production. In essence the State assumed the role of the people by proxy.

Nazism was not so much interested in the illusion of who controls production as much as every citizen serves the needs of the State paying homage to the elites of State that made the lives of true citizens prosperous. Consider how the word Nazi Party gained its appellation:

What does NSDAP stand for?

The 24th edition of Etymologisches Wörterbuch der deutschen Sprache (2002) says the word Nazi was favored in southern Germany (supposedly from c. 1924) among opponents of National Socialism because the nickname Nazi, Naczi (from the masc. proper name Ignatz, German form of Ignatius) was used colloquially to mean “a foolish person, clumsy or awkward person.” Ignatz was a popular name in Catholic Austria, and according to one source in World War I Nazi was a generic name in the German Empire for the soldiers of Austria-Hungary.

An older use of Nazi for national-sozial is attested in German from 1903, but EWdS does not think it contributed to the word as applied to Hitler and his followers. The NSDAP for a time attempted to adopt the Nazi designation as what the Germans call a “despite-word,” but they gave this up, and the NSDAP is said to have generally avoided the term. Before 1930, party members had been called in English National Socialists, which dates from 1923. The use of Nazi Germany, Nazi regime, etc., was popularized by German exiles abroad. From them, it spread into other languages, and eventually was brought back to Germany, after the war. In the USSR, the terms national socialist and Nazi were said to have been forbidden after 1932, presumably to avoid any taint to the good word socialist. Soviet literature refers to fascists.

The Wikipedia entry for “Nazi Party” goes into greater detail if you are interested. At Wikipedia the focus is more on nationalism combined with racism more than Socialism.

Either way, Nazism and Communism were political vehicles to control the masses under the direction of an elitist oligarchy.

Matt Barber has written an essay that I located on Constitution.com highlighting that Adolf Hitler was an anti-Christian pretending to be a Christian with Left Oriented Socialism in the backdrop.

Who does that sound like today in 21st century America? Since Barber doesn’t mention any modern day similarities, allow me to name a couple:

No, Hitler Was Not a Christian… He Was More Like Modern-day “Progressives”. 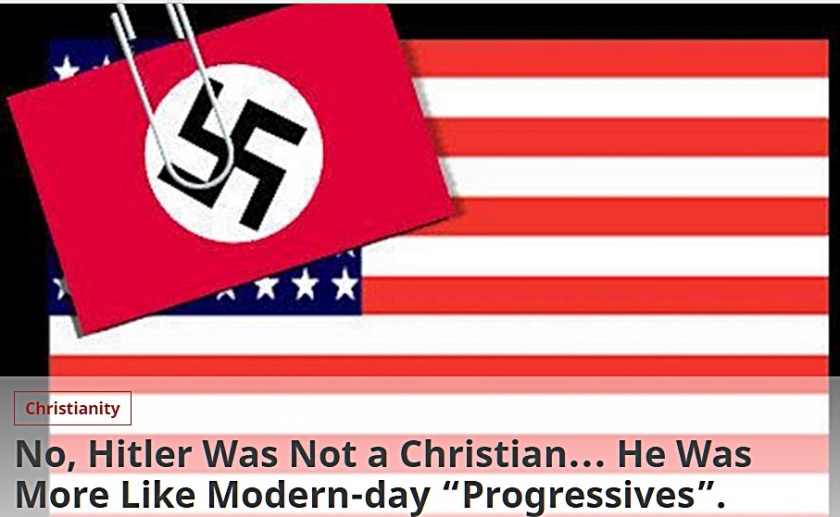 “[T]he only way of getting rid of Christianity is to allow it to die little by little.”

Yes, there have been evil men who have done evil things in the name of false Christianity. To a limited degree, Adolf Hitler was one such man. Still, and as even he frequently admitted outside the public eye, he was no Christian.

As a counterweight to stigma associated with the tens of millions slaughtered in the 20th century alone under the atheist regimes of Lenin, Stalin, Mao, Pol Pot, et al., the secular left is quick to thunder, “But what about Hitler? He was a Christian!”

Bad news, kids. Herr Führer was your guy, too.

“I shall never come personally to terms with the Christian lie,” Hitler confessed (audio transcribed in “Hitler’s Table Talk” [1941-44]). “It would always be disagreeable for me to go down to posterity as a man who made concessions in this field [to be labeled a Christian].”

Did Adolf Hitler ever call himself a Christian? Certainly. He did so, and as he would later admit, for the singular purpose of disseminating political propaganda.

“To whom should propaganda be addressed?” he wrote. “It must be addressed always and exclusively to the masses. … The whole art consists in doing this so skillfully that everyone will be convinced that the fact is real.”

The Nazi Germans of the 1930s and ’40s are not alone in swallowing Hitler’s Christianese-peppered puffery. Today’s secular- “progressive” establishment likewise bandies about a handful of carefully crafted Hitlerian quotes released for public consumption. His “pro-Christian” proclamations in “Mein Kampf” and elsewhere, for instance, were universally a perversion of biblical Christianity leveraged for the sole purpose of justifying the extermination of the Jewish people.

“My feelings as a Christian points me to my Lord and Savior as a fighter,” he wrote. “In boundless love as a Christian and as a man I read through the passage which tells us how the Lord at last rose in His might and seized the scourge [the Jews] to drive out of the Temple the brood of vipers and adders. How terrific was His fight for the world against the Jewish poison. … For as a Christian I have also a duty to my own people.”

That was the extent of Hitler’s plastic “Christianity.” The Bible, always taken out of context, served as a twisted weapon to justify the mass slaughter of over 11 million Jews, Christians, disabled people and other “undesirables.”

In reality Hitler insisted, “In the long run, National Socialism and religion will no longer be able to exist together.”

Sounds an awful lot like today’s American church-state separatists. Roger Baldwin, founder of the ACLU, for example, held, “I am for socialism, disarmament, and, ultimately, for abolishing the state itself. … I seek the social ownership of property, the abolition of the propertied class, and the sole control of those who produce wealth. Communism is the goal.”

Indeed, the ACLU’s promotional materials similarly advocate anti-Christian intolerance and mirror Hitler’s directive that, “Socialism and religion will no longer be able to exist together.” “The message of the Establishment Clause is that religious activities must be treated differently from other activities to ensure against governmental support for religion,” imagines the “American” so-called “civil liberties” union.

This is secular socialism in a nutshell. It’s a religion, and its devotees, be they Nazi Germans or American Leftists, are Communist Manifesto-thumping fundamentalists.

“There is something very unhealthy about Christianity,” Hitler opined. “As far as we are concerned, we’ve succeeded in chasing the Jews from our midst and excluding Christianity from our political life. … The heaviest blow that ever struck humanity was the coming of Christianity. Bolshevism is Christianity’s illegitimate child. Both are inventions of the Jew. … Christianity is an invention of sick brains: one could imagine nothing more senseless.”

Indeed, Hitler’s robust anti-Christian hatred lives on beyond the death of the Third Reich. Modern-day progressives like Hillary Clinton, though, tend to take a kinder, gentler, more surreptitiously totalitarian approach: “Rights have to exist in practice – not just on paper,” the presumptive Democratic presidential nominee recently said in the context of some phantom “right” to exterminate undesirable infants. “Laws have to be backed up with resources and political will. And deep-seated cultural codes, religious beliefs and structural biases have to be changed.”

Yikes. “Meet the new boss, same as the old boss.”

While Hitler was more direct, he nonetheless shared Hillary’s secular socialist vision: “We’ll see to it that the Churches cannot spread abroad teachings in conflict with the interests of the State. We shall continue to preach the doctrine of National Socialism, and the young will no longer be taught anything but the truth.”

Hitler, borrowing from socialist icon Karl Marx, said that all Germans must “free themselves from the drug of Christianity. Let’s be the only people who are immunized against the disease.” Marx, a hero to the secular socialist left, famously called religion, “the opium of the people.”

Hitler a Christian? No chance.

Anti-Semitism, Islam and a Dash of Darwin

Moreover, like the preponderance of today’s similarly anti-Semitic secular progressives, Hitler, too, was an apologist for Islam. As America’s own Dear Leader has done, Hitler partnered with Iran, present-day “Palestine” and other Islamist regimes in the shared goal of eliminating the Jews:

“The world had fallen into the hands of the Jews, so gutless a thing was Christianity!” he fumed. “Then we should in all probability have been converted to Mohammedanism, that cult which glorifies heroism and which opens the seventh Heaven to the bold warrior alone. Then the Germanic races would have conquered the world. Christianity alone prevented them from doing so!”

Hitler also parroted the godless ideology of modern atheists. Like so many of today’s secular progressives, he was an avowed materialist, neo-Darwinian evolutionist and hardhearted God-denier: “When understanding of the universe has become widespread, when the majority of men know that the stars are not sources of light but worlds, perhaps inhabited worlds like ours, then the Christian doctrine will be convicted of absurdity.”

“Christianity, of course, has reached the peak of absurdity,” he said. “And that’s why one day its structure will collapse. Science has already impregnated humanity. Consequently, the more Christianity clings to its dogmas, the quicker it will decline.”

And so Hitler endeavored to assist “natural selection” and, as he wrote in “Mein Kampf,” “establish an evolutionary higher stage of being.” He placed his hope in Germany’s youth because they were “absolutely indifferent in the matters of religion.”

A beloved Hitler Youth marching song captured the Führer’s heart on matters of Christ and Christianity:

We follow not Christ, but Horst Wessel,
Away with incense and Holy Water,
The Church can go hang for all we care,
The Swastika brings salvation on Earth.

Today’s progressive “social justice” warriors are angling for a dystopian, Swastika-free repeat. Their hope, too, lies in the youth (witness the socialism-fueled anarchist insurgence occurring on college campuses nationwide).

Like then, progressive secular socialists endeavor to rule the world.

And “Christianity alone,” to update Hitler’s own words, will “prevent them from doing so.”

Matt Barber is founder and editor-in chief of BarbWire.com. He is author of “Hating Jesus: The American Left’s War on Christianity,” a columnist, a cultural analyst and an attorney concentrating in constitutional law. Having retired as an undefeated heavyweight professional boxer, Matt has taken his fight from the ring to the culture war. (Follow Matt on Twitter: @jmattbarber).

American Left can be seen in Nazi History

No, Hitler Was Not a Christian… He Was More Like Modern-day “Progressives”.

Copyright © 2016 The Constitution. All Rights Reserved.