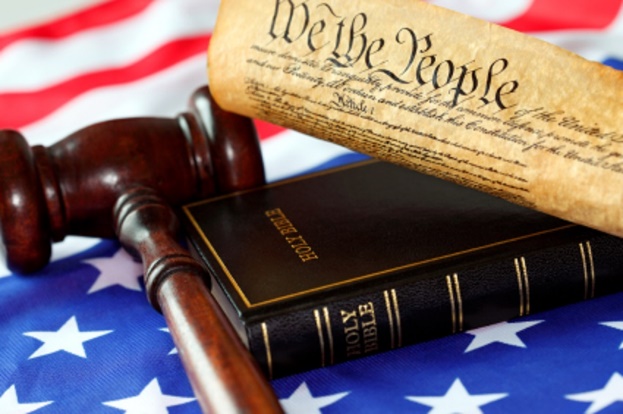 It is gratifying there are Patriots in America displeased with an unconstitutional SCOTUS. Justin Smiths shares some thoughts on the Obamacare subsidy ruling and the Same-Sex Marriage ruling.

“The Liberties of Our Country … are worth defending at all hazards … We have received them as a fair inheritance from our worthy ancestors … purchased … with toil … and expense of treasure and blood. — It will bring a mark of everlasting infamy on the present generation … if we should … be cheated out of them by the artifices of designing men.” – Samuel Adams

Two-hundred and thirty-nine years of freedom and liberty and the American Heritage, as that “shining city on the hill,” a beacon and a place of safety for all peoples that offers a glimmer of hope for a better future and a better tomorrow, are coming to a grinding halt. With Congress moving America towards transnational fascism (TPA) and the Supreme Court acting in a lawless fashion concerning Obamacare – King v. Burwell – and the issue of same-sex marriage, the “land of liberty” is facing the greatest challenges of its entire history.

The majority of Americans stand for American interests to be first and foremost in our foreign policies, and we oppose globalism. We believe this country has the right and obligation to secure Her borders, Her sacred Heritage and Her values. And we believe in a small constrained federal government, with its inevitable corruption confined within the limited role set for it by the Founding Fathers.

When the Supreme Court can arbitrarily decide to provide alternative and false meanings to words written and passed by our elected representatives and ignore other laws, in order to align with the goals and agendas of whoever happens to be in power, we are on the road to tyranny, like it or not.

As noted on June 25th by Supreme Court Justice Antonin Scalia _ a true Son of Liberty:

(On Obamacare) “We should start calling this SCOTUSCare … this Court’s two decisions on the Act will surely be remembered through the years. The summersaults of statutory interpretation they have performed (‘penalty’ means tax … ‘established by the State’ means not established by the State) will be cited by litigants endlessly, to the confusion of honest jurisprudence.”

“I write separately to call attention to this Court’s threat to American democracy … Today’s decree says that … the ruler of 320 million Americans coast to coast is a majority of nine lawyers on the Supreme Court.”

In Katie Pavlich’s ‘Gay Marriage is a Constitutional Right‘, the observation is made that Chief Justice John Roberts’ accusation that the Court acted “out of preference” is “an interesting description considering he did the same thing on King v. Burwell.”

Former Governor Mike Huckabee’s assessment on this egregious mess coincides with Chief Justice Roberts’ dissent. Huckabee said: “They [the Justices] didn’t rule on any existing law. They simply redefined marriage”; and Roberts stated: “The majority’s decision was an act of will, not legal judgment. The right it announces has no basis in the Constitution or this Court’s precedent.”

Marriage defined as a union between one man and one woman is a part of America’s core traditional value system. Our ancestors were mostly Christian, and, as such, the majority of Americans have understood marriage as set forth in the Bible. They also hold fast to God’s commandment in Leviticus 18:22 _ “Man shall not lie with man as with woman; it is an abomination.”

The Court’s ruling on homosexual marriage is nothing less than an attempt to force Christianity out of America’s public square and underground, as the Far Left moves to culturally transform America. Chief Justice Roberts pointedly observed: “As a result the Court invalidates the marriage laws of more than half the states and orders the transformation of a social institution that has formed the basis of human society for millennia, for the Kalahari Bushmen and the Han Chinese, the Carthaginians and the Aztecs. Just who do we think we are?”

All of these disgusting anti-liberty, anti-American developments moves me to tell the fascist Progressives of both parties “You don’t belong here.” Go find a place where the people welcome the idea of a permanent ruling class. There are plenty of them out there, but it’s not here.

Take your tools in the press, your sycophant followers, the poltroons and quislings, your socialist pipedreams and your Hell called “Utopia”. Take your self-serving transnational vision of one borderless world, united under your thumb. That might be fine for others, but it’s not for the Sons and Daughters of Liberty still living in America.

Whatever the motives of Obama and the five Progressive activist Justices, America cannot allow itself to be dragged down into the dung heap of totalitarianism, as a result of the majority’s misapplication of clauses like “due process”, aimed at affording substantive rights at the expense of ‘liberty’ and through a distortion of the principles on which this Nation was founded. Our path can only be up to man’s age-old dream and the ultimate in individual freedom consistent with law and order.

The sole thing tyranny fears is the truth, and therein lies a sworn mission for each of us. All who believe in liberty must do everything to convince their fellow Americans of the importance of a conservative path towards freedom. Tell the truth to the good people of the United States, and through that revelation, restore America to the greatness She was founded to attain.

There is a God, and this God of all Creation would prefer us to be free. That means He must love this country, not so much for what we’ve allowed it to become, but deeply for what it was once meant to be.

However, there is a never ending war being waged for the heart of America — because true Evil cannot be stopped and the truly Good will not be moved. [This] is a battle that must be won or lost every day, by one side or the other, and no less than the fate of free mankind hangs in the balance.

The outcome may still be in question, but I know where I stand. To those yet undecided, there’s a place here beside me or out there against me, once you’re moved to make up your mind.

Rise up America and let Liberty’s dimmed light once more burn bright. It awaits an awakening, so this one nation and the love of true Liberty at its heart can be restored to Her old glory. America demands much of those that hear the call, and the first hard thing it asks is courage.

Text enclosed by brackets and links are by the Editor.

One thought on “America Rising”