Wednesday morning three armed Muslim terrorists forced a person (female cartoonist) to enter a security code went into the satirical publication Charlie Hebdo in Paris entered a Board Meeting and massacred 12 people. I heard on Fox News that there were 11 wounded. 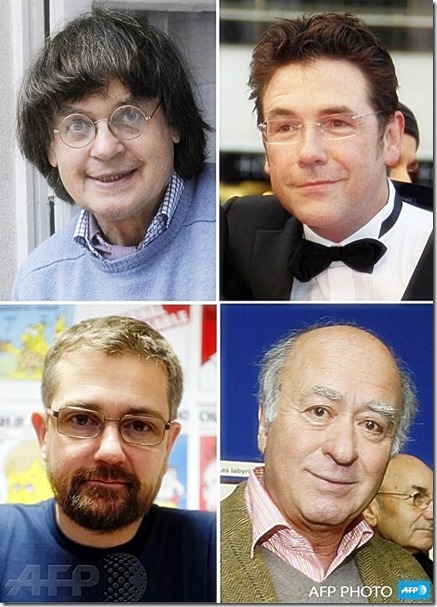 Vox.com identifies the other eight victims as:

Ahmed Merabet – 42-year-old police officer, was patrolling the neighborhood when he encountered masked gunmen outside the Charlie Hebdo building

Four others, including three journalists and a receptionist, are believed to have died.

The three Muslim butchers are:

Late Wednesday night Hamyd Mourad surrendered to police claiming innocence in the matter of the butchery. Some French High School buddies (I am presuming fellow Muslims) have tried to alibi Mourad by claiming he was in class Wednesday morning. From what I could discern the police believe currently Mourad was the get-away driver. There is a familial connection with one of the Kouachi brothers as a brother-in-law.

Here are a couple of excerpts from French news outlets translated courtesy of Google:

[Updated January 8, 2015 at 10:44] Seven people were taken into custody in connection with the investigation into the attack occurred yesterday. Manuel Valls confirmed the news Thursday morning on France Inter. Two of them were arrested in Charleville-Mezieres, four were arrested in Reims. Another person was arrested in Genevilliers. All are described by AFP as members of the entourage of the main suspects.

>> It’s Charleville Mezieres Mourad Hamyd visited before being placed in custody. His family said he was at school in the morning of the attack.

>> According to AFP, the youngest of the suspects, Hamyd Mourad, 18, high school student born in Charleville-Mezieres, is suspected of having acted as a driver of the two assailants Charlie Hebdo. A classmate said Thursday morning that he was in class Wednesday, January 7th.

The youngest of three wanted men after the attack against the newspaper “Charlie Hebdo” presented himself to the police, said the AFP in the Wednesday and Thursday night. …

Hamyd Mourad, one of three suspects in the bloody attack Wednesday morning against “Charlie Hebdo” has “rendered” to the police, said the AFP in the night of Wednesday 7 to Thursday, January 8, citing corroborating sources.

A spokesman for the Paris prosecutor’s office, quoted by Reuters, for its part, insisted that the young man, born in 1996, “does not go” but presented himself voluntarily the authorities. She declined to give further details.

The man aged 18, who was the brother-in-law of one of the two other suspects, was presented to police around 23 pm Wednesday at the police station in Charleville-Mezieres (Ardennes) “after seeing that his name was circulating on social networks, “according to a source close to the matter cited by AFP. Its possible role in the attack has not yet been clearly established.

Internet posing as her classmates had previously said on Twitter that Mourad Hamyd was being with them in high school in Charleville-Mezieres, at the time of the attack, using the keyword #MouradHamydInnocent.

“He was arrested and placed in custody,” said another source close to the matter told AFP, as saying that “several police custody” were being “in the circle” of the other two suspects still sought Two brothers aged thirty years.

The brothers are from the nineteenth arrondissement of Paris and the youngest, Cherif Kouachi, was sentenced in 2008 to four years in prison for participating in a send fighters die in Iraq. Investigators recovered to include them after finding the Saïd identity card in a car abandoned by the fugitives in the northeast of Paris.

As of 8:57 AM Thursday morning the Kouachi brothers were still fugitives. 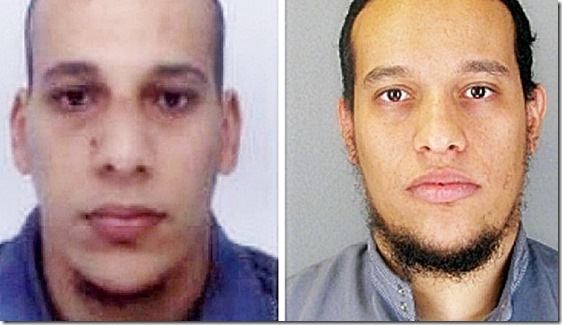 The largest concentration of Muslims in Western Europe is in France. I find this a bit ironic because the French government has had a history of marginalizing Muslim immigrants especially since the nation lost its Algerian colonial possession after a brutal civil war that ended with Algerian independence in 1962.

Islam is the second-most widely practiced religion in France behind Roman Catholicism by number of worshippers. With an estimated total of 5 to 10 percent of the national population, France has the largest number of Muslims in Western Europe …

Estimations based on people’s geographic origin

According to the French Government, which does not have the right to ask direct questions about religion and uses a criterion of people’s geographic origin as a basis for calculation, there were between 5 to 6 million Muslims in metropolitan France in 2010. The government counted all those people in France who migrated from countries with a dominant Muslim population, or whose parents did. Only 33% of those 5 to 6 million people (2 million) said they were practicing believers. That figure is the same as that obtained by the INED/INSEE study in October 2010.[4]

According to Jean-Paul Gourévitch [Blog Editor: This link source in English has no info on the individual] (fr [Blog Editor: “fr” is an abbreviation for French and indication an article on Gourévitch that establishes his bona fides as a source. See **]), there were 7.7 million Muslims (about 11 percent of the population) in metropolitan France in 2011.[9][10]

… (Islam in France; Wikipedia; This page was last modified on 8 January 2015 at 09:15 – Much of the Wikipedia text in bold had links removed I felt were TMI)

Jean-Paul Gourévitch is a writer, essayist, trainer and consultant international French, born in 1941 known for his studies on migration and youth literature

On Africa and migration.

In 2012 he intervenes on March 10 at the conference “France in danger” 48 , 49 , 50 organized by the association-Nationality Citizenship, Identity, a “false nose” of the Bloc identity 51 ; He has lectured in March for the Association of African Students and Trainees in France (ASEAF) as part of the symposium “African Perspectives” [ref. Kiosk for the Citizen of Rennes in April 52 and was interviewed by Associated Taxpayers on Radio Courtesy November 53 , 54 . He has lectured for the association The African Presence of Friends in December 55 , and the same month for the Freemason movement The Grand Lodge of France [What?] on “African immigration in Europe, especially in France. Analysis and lighting to debunk the misconceptions” [ref. required] . …

Debates about immigration and its cost

Jean-Paul Gourévitch evaluates the foreign population living in France in 2009 to 7.7 million people (3.4 million and 2.4 million North Africans from Sub-Saharan Africa), 12.2 % of the current metropolitan population 76. This figure includes immigrants (foreign-born) over 18 years (5.4 million), and only the children of immigrants (born in France or abroad) under 18 years (2.3 million). The original North African immigrant children under 18 years (1.2 million) account for 8.5% of all young people under 18 years in France and in sub-Saharan origin (0.8 million) 5 6%. A total of 14.1%, or nearly one child under 18 in seven of African metropolis is 77.

In an audit entitled “The cost of migration policy of France” (2010), it encrypts the cost of immigration to 30.4 billion euros annually “to the taxpayers,” after estimating revenue and expenditures for the state, local government and social security (the government). The cost of illegal immigration alone represent nearly 4.6 billion euros annually 78. In 2012, a new edition assesses this time to 17.5 billion (of which 8.76 for the balance expenditure / revenue and 8.652 for the balance investment / return} the cost of immigration.

In case you were not aware the closest thing to a good Muslim is one that adheres to Islamic holy writ especially the Quran which is considered the express very words of Allah delivered through the lips of that religion’s psycho-prophet Mohammed. Unlike the Jewish and Christian God of the HOLY Bible the Allah of the Quran expects his followers to avenge insults in the here and now as much the old moon-god will do so in Islam’s description of the Last Days. Hence the massacre at Charlie Hebdo was in line with the actions expected of a good Muslim. Those Muslims that tell you different are purposely deceiving the kafir, personally unknowing of their own theology, nominal Muslims that either have become secularized or are wise enough to toss out the unwholesome text of the Quran and Hadith (Thank God for the latter).

In the USA among the most deceiving Muslim groups in the Council on American-Islamic Relations (CAIR). The CAIR National Executive Director Nihad Awad is quoted on the Anti-CAIR website founded by Andrew Whitehead:

“…The proper response to such attacks on the freedoms we hold dear is not to vilify any faith, but instead to marginalize extremists of all backgrounds who seek to stifle freedom and to create or widen societal divisions.”

Andrew Whitehead is the first person that I became aware of that CAIR exercised Legal Jihad (aka Lawfare See also HERE) against (I say “aware” because there may have been earlier CAIR Legal Jihad). Whitehead accused CAIR of being a front group for the Islamic terrorists Hamas before the HLF trial and the book The Muslim Mafia gave smoking gun proof of such linkage.

Vive La France!  Today, We Are All French

We’ve now learned that Islamic-Jihad-Terrorists have attacked and murdered 12 staff and others at the headquarters of the French satire magazine, “Charlie Hebdo”.

Once again, CAIR calls for the stifling of free speech in the name of supporting free speech. CAIR’s top Apologist for radical Islam, Nihad Awad, often attempts to paint CAIR as somehow representing American Muslims.  We note that CAIR’s membership represents far less than 1% of American Muslims and that CAIR’s support has come from Islamic terrorists and foreign governments that support Islamic terrorism.

We note that the United Arabic Emirates (UAE) has designated CAIR a Terrorist Organization, explaining, “We cannot accept incitement or funding” of terrorism. CAIR has requested the U.S. government help with CAIR being taken off the UAE’s terrorist sponsoring list, but given CAIR’s problematic relationship with government at all levels and direct ties to terrorist groups, Anti-CAIR believes that the U.S. government should not intervene on behalf of CAIR.

Peoples of the world are entitled to examine, complement, exalt, condemn, vilify, and hate Islam as they chose.  Permission of CAIR, or any other Islamist-terrorist supporting group is not required.  Nihad Awad’s weak yet typical statement is an insult to free peoples everywhere.

We ask all press to not use CAIR in any stories.  CAIR does not speak for American/Canadian Muslims and to give CAIR a public voice is to hurt the memory of all victims of Islamism, worldwide. CAIR should be roundly marginalized because CAIR’s hateful speech, lies, vilification, fraud, and proven ties to terrorists should not have a place in the free American and Canadian press. CAIR will shrivel and die on the vine once it is cut off from the press; let us join to make it so.

Nihad Awad’s response to the Charlie Hebdo massacre is typical Muslims who pretend to be the erstwhile moderate Muslim but uses word games to deflect rather than to denounce an attack in the name of Islam perpetrated according to Islamic holy writ.

As Americans who benefit from the Rights and Liberties our U.S. Constitution affords us we must never allow any kind multicultural acceptance of this purest Islam and especially not from Muslims pretending to be moderate yet truthfully support the full agenda of the Quran, Hadith and Sira.

Typically I am not a huge fan of the way the modern French have treated Americans, but I gotta to tell ya – This must be a wakeup call not only to France but to all the nations of the EU that multicultural diversity as an internal policy pertaining to Islam is a failed policy.

One thought on “Charlie Hebdo could easily happen in the USA”