I found an article that is placed as a kind of a filler to the online journal Think-Israel. I typically like to link back to any cross posts that I enjoy and wish to share; this essay entitled “SOME RANDOM THOUGHTS ABOUT THE PEACE PROCESS OF 2013-14” does not seem to have a direct link as it is smack in the middle of Think-Israel summary essays of which you can find a direct link. So here the link that has the essay summaries in which if you scroll down you will discover from whence this very pertinent essay will be found:

I am uncertain how long this link will work or if the essay I am interested will be moved as Think-Israel publishes more essays. Nonetheless and without further ado here is the essay about the idiocy Europe and the USA is forcing upon Israel by forcing them to give up their ancestral to provide an Arab nation for a group of Muslims who CANNOT account for an actual ancestry to the area.

SOME RANDOM THOUGHTS ABOUT THE PEACE PROCESS OF 2013-14

JIHAD OPERATIONS IN THE UNITED STATES

With the turbulence in the Middle East and all the slaughter among Muslim groups, and Iran close to having the nuclear muscle to bully the entire region, isn’t it odd that the European Union and the Obama Administration focus on the peace process between Israel and the Arab states, the Palestinian Arabs, the Palestinian Authority, Abbas, elected head of the PLO, Abbas, the out-of-office president of the PLO? Does it seem the Administration is thinking about currently important issues?

It reminds me of a cartoon — by Vargas, I think — eons ago: two women are seated in a subway car. The car is empty except for a naked woman seated opposite them. One of the women whispers to the other, “Look at her chapped hands.” Is the peace process anything but a side show in the tumult of the region?

Isn’t it curious that when uncivil war broke out across the Middle East, mighty America was so fearful of Arab violence, it shut down 22 of its embassies.  (sic) Yet it forced Israel to release Arabs who brutally massacred Jews, knowing they will again prey on Jews. Do the clowns who were elected to run our country really have their minds on the essentials? Does the Obama Administration have Israel’s back? It acts as if it had a knife aimed at Israel’s back. Or a nuclear bomb.

Another image comes to mind. It a photo taken in the late 1930s. England and France thought they had avoided war with Germany by appeasing Hitler’s demands. England and France forced the Czechs to cede Sudetenland, the area of Czechoslovakia where the majority of the inhabitants were German speakers, to Germany. In doing so, they disregarded that Hitler had in earlier negotiations demanded autonomy for Germans in Poland and Hungary as well as in Sudetenland. The Munich Agreement was signed on September 30, 1938, with Hitler agreeing to make no further demands. However, by March, 1939, Germany had incorporated Sudetenland and Hitler’s soldier moved into what was left of Czechoslovakia. England and France had to fight Germany anyway, a stronger and more confident Germany. 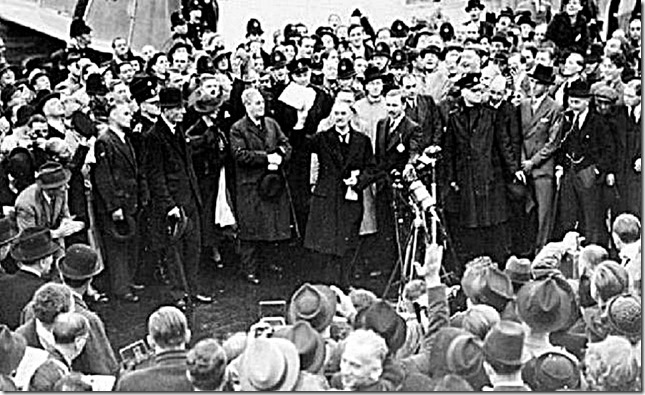 Photo: Chamberlain holds up Munich Agreement, signed by both Hitler and himself, in 1938. (Wikimedia Commons) 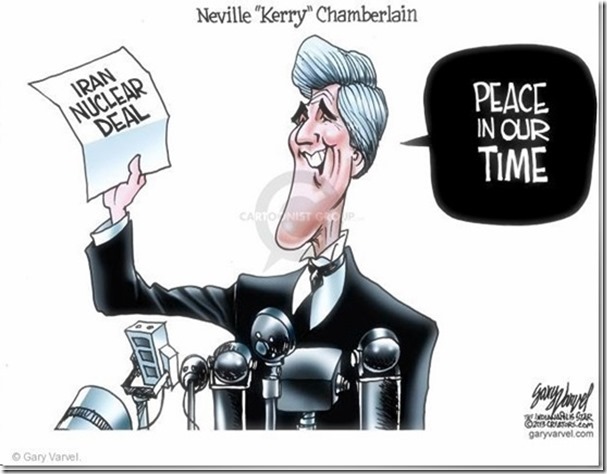 Another association comes to mind. While Rome burned, the Emperor Nero sang as he played the lyre. Nowhere have I read that Nero thought that were he to produce the right music, he could solve the problems of the Roman Empire. In contrast, Prez Obama is fixated on the notion that the Arab-Israeli conflict is the linchpin of Middle East instability. And he thinks his tinkering will solve everything.

Avi Bell’s essay on “The Facts Of Life In The Middle East” (http://www.israpundit.com/archives/56671) has the ring of truth to it. He writes:

If Israel makes preconditions to negotiations, that proves Israel is not interested in peace, because it is trying to avoid negotiations.

If Israel makes no offer of peace, that proves Israel is not interested in peace.

There are variations on this, e.g.,:

If Arabs make war, but offer to end it, that proves that Israel is interested in war and Arabs are interested in peace, because the Arabs offered peace. (Thomas Friedman/Arab “peace” initiative)

If Israel makes war, but offers to end it, that proves that Israel is interested in war and Arabs are interested in pece (sic), because Israel made war. (Defensive Pillar, Lebanon II, etc.)

If Arabs attack, that proves Israel is interested in war and Arabs are interested in peace, because Israel provoked the Arabs to attack.

The peace process is to be carried out by two groups, one of which has sworn to kill off the other. The Arabs have never swerved from their desire to rid the Middle East of Israel. So what’s to negotiate? Whether the Arabs will be allowed to kill 50,000 Jews or only 5,000 Jews? Will the sides haggle on whether the land the Arabs take over will be turned into training camps for terrorists and factories for making explosive belts or just manufactories?

Does anyone see it as peculiar that Sec-State Kerry, the American “honest broker”, praised the recalcitrant Arabs and was well — how shall I put this? — extremely undiplomatic with the Israelis? Even though the Israelis had been so cooperative they released Arab terrorists just to persuade Abbas to come to the table. I wonder what getting them to sit in the chairs will cost Israel?

This brings up another point: are the Arabs so sure of their standing with the American Administration that they don’t need even to pretend to wish for peace? Instead, Abbas demanded the return of his heroes, killers of Jews, and Kerry, the toothy fairy, made his wish come true. To me. the ugliest consequence of each plunge by Israel into peace-seeking is that she slowly has become accustomed to sacrificing her children, her pride and her sense of integrity, as Daniel Greenfield says in an essay below, on the “alter of peace.” [Editor: Link Added] Why can’t Israel just say no to Obama? Other countries on the planet, large and small, powerful or with no real resources, have no trouble doing so. Being cooperative on the Peace Process isn’t going to make Obama stop Iran from manufacturing nuclear weapons. If the Israelis have been caving on concessions to the Palestinian Arabs in the hope that Obama will finally handle Iran effectively, they should by now recognize that it ain’t going to happen. Obama will just keep stringing them along.

All in all, the focus on the Peace Process of 2013-14 makes little sense. I suspect it will make even less sense to future historians. Unless Israel makes the mistake of leaving Samaria and Judea to her enemies. Then it will be known as the beginning of the demise of Israel.

THINK-ISRAEL features essays and commentaries that provide context for current events in Israel. The war Islam is waging against Israel and the West is top priority. We report on global anti-Semitism, Islamism and creeping Sharia. We aim to make sense of what’s going on.