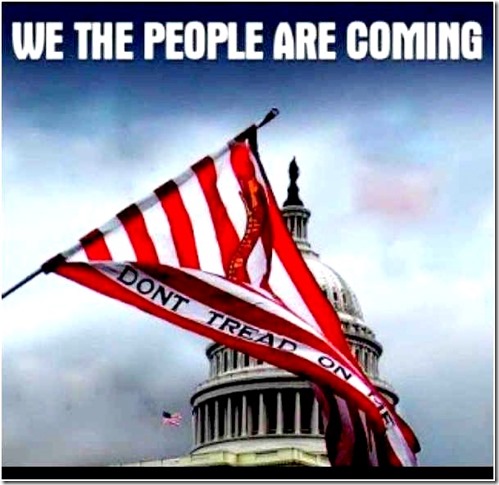 Justin Smith writes about defunding Obamacare even if the debt ceiling is not ultimately raised. He believes the onus of the lack of budget will fall on President Barack Hussein Obama and the rest of the big spending Socialist-minded Dems. Most importantly Justin calls on individual States to utilize Article V of the U.S. Constitution to call a Constitutional Convention with a specified agenda to repeal Obamacare. A specified agenda would deal with the fear of both sides of the political spectrum that a Constitutional Convention is not a run-away convention destroying the spirit of the Founding Fathers’ revolutionary Constitution.

As the October 1, 2013 enrollment period for the Patient Protection and Affordable Care Act (PPACA) nears and Obama and a host of temporary politicians and Progressives gleefully ruminate over permanent societal changes effected by the PPACA, some Americans are preparing to submit to the ignoble lie called “Obamacare,” even though nothing exists in the entirety of U.S. history, the Constitution and the Commerce Clause that empowers any of the three branches of the federal government to force a person to enter into a legally binding contract against the individual’s will. And, no matter what nonsense Chief Justice John Roberts wrote, the majority of the American people still know Obamacare to be unConstitutional and representative of a gross overreach of power by the Obama administration and the Progressives.

Obama has “found loopholes,” that he and Progressives surely knew existed beforehand, which exempt Congress and their staffers and the Executive and staff from Obamacare. They act as if this is the Obama monarchy and they, Republican and Democrat alike, are his entourage of aristocrats!

Since when do we make laws applicable to only certain segments of society anymore? Since when are government officials above the law? And, why should I or anyone else comply with a law that even exempts the unions and does not apply evenly and equally throughout our society?

Although Obama has warned of an “economic backslide” if the Republicans bring the Obamacare fight to the continuing resolution and fight him over the budget (lack of a budget) and raising the debt ceiling, some Republicans in the Senate, such as Bob Corker (R-TN)are refusing to attempt to defund Obamacare by September 30, because they do not want the blame for any government shutdown that may result from this fight; and now that the House funded the entire government except for Obamacare with a vote of 230 to 189, the Progressives in the Senate probably will not pass the bill, Obama will not sign it and the Progressive Democrats will be the ones shutting down the government.

Why run from this battle? Let the government shut down, and place the onus on Obama; his actions during such a shutdown will surely serve to return the Congress and the Senate to solid, conservative, patriotic American leadership in 2014 and 2016. And, do not worry about the essentials of government, because they continue normally during a government shutdown, unless Obama’s inclination towards illegal activity moves him to act unConstitutionally and interfere with the military, Medicare and Social Security.

House Representatives, such as Diane Black (R-TN) and Marsha Blackburn (R-TN) have suggested that a government shutdown will allow Obama to decide which government services are the most vital for the “protection of life and property,” and they believe he will have the government purse at his disposal through “discretionary spending”. However, the President does not have such authority anywhere in the U.S. Constitution or any of its 27 Amendments. Essentially, they are saying that Obama will fund the PPACA even if he has to take funds from numerous government departments, illegally and unConstitutionally… which has never stopped him before; and, he may do just that, since he has no regard for the law, the U.S. Constitution or Our American Heritage!

Many elected officials, as well as noted newscaster Brit Hume (FoxNews), have observed that Obama will not readily accept a delay of the individual mandate, even though he illegally delayed the business mandate, because Obama needs to get the money flowing and people hooked on the “free” subsidized benefits under the PPACA; it is nearly impossible to reduce or end such a program, once it is really up and running, as history shows.

We cannot let Obamacare become permanently embedded in the social fabric of America; good or bad, Obamacare is nowhere near ready for implementation, therefore, delay, at the very least, is absolutely necessary, but ‘We the People’ continue to demand, “Defund Obamacare!”

When will anyone stand and fight? …ever?

“We don’t have the votes”…damn you Bob Corker…tell me something I don’t know and get out there and fight for those votes! If You spent as much time fighting to defund Obamacare as you do holding Obama’s hand and stating the obvious, Obamacare would already be a thing of the past!

Obama and his administration, the U.S. federal government or any government does not have the authority to trespass on our individual sovereignty. So, I will not be signing up for Obamacare on October 1, 2013 through January 2017, or at any time during my lifetime, and I will not voluntarily answer any medical questions on IRS tax-forms; fine me $285, $975 or $2085, I will not pay; come to arrest me, I will resist.

Anyone following my example will be called “criminal” by Obama and the Progressives… the real criminals. But, there is nothing “criminal” in defending the U.S. Constitution, Our American Heritage and our freedom, as we strive to return America to governance as a Constitutional Republic, rather than under an elitist despot. You are the Patriots!

As we engage in civil disobedience, let us all start a conversation with our state legislators and ask them to start working towards a States’ Convention for the purpose of proposing an Amendment to the Constitution that repeals the PPACA. A good starting point will have one state legislature…Tennessee, Virginia, Texas?… discuss this quickly with the other 49 legislatures; as soon as they can come to an agreement on this matter, they can begin choosing their delegates for the Convention.

Each respective state legislature will vote to attend or decline participation in such a Convention, and some states may place the question to the people in a referendum. It only takes thirty-three states presenting their Applications to congress to get the ball rolling, and Congress cannot impede this process in any manner, because its role regarding Article V is purely ministerial; the President and the U.S. Supreme Court cannot interfere with this Application or a convening States’ Convention.

There is also not any need to fear the myth of a “runaway Convention,” since each state delegate is sent with a very specific agenda in mind and directed by a quorum of the state legislature. These delegates are also subject to immediate recall if they stray erroneously from previously decided guidelines. And, whatever is proposed at one of these Conventions, in this case repealing Obamacare, must receive an affirmative vote from three fourths of the states; it naturally will also take some time to organize, but it is time well invested for the future of the American people.

Freedom and the dignity of the individual has never been more available and assured than right here in America, until the advance of the Obama regime. Our ancestors paid a high price for this Freedom, and Americans are certainly poised to pay a high price now and battle Obama and the Progressives with every available means. Whether or not Congress and the Senate ultimately defund Obamacare, Americans can and will decide on their own if they will be a free, responsible and prosperous people living under a Constitutional limited government or a dependent, indolent and impoverished people living at the State’s pleasure: We are too great a nation to limit ourselves and tolerate the confines of the tranny embodied by the PPACA and Obama’s “fundamental transformation!”