Former comedian turned Fringe Leftist Senator – Al Franken – unsurprisingly is becoming implicated in the IRS Scandal to target Conservative Tea Partiers to silence any opposition to his reelection bid in 2014. Apparently the Obama Administration has made a bid to maintain political power by using the Internal Revenue Service to target Conservatives – especially Tea Party people – to villainize them and to stop the real truth to expose Democrat deceit and Obama illicit deception.

The Conservative Campaign Committee (which I believe is a part of the Tea Party Express) is targeting Senator Al Franken (an Obamunista) reelection campaign. In a fund raising email CCC utilizes Franken’s involvement with the IRS Scandal to collect a political war chest to help the (probable) best Tea Party Conservative to defeat Franken.

“When you really talk about connecting the dots, this is no longer a presidential scandal, this is a Democratic scandal” said Lewis.

Lewis started off his talking point by explaining the scandal’s original basic details and then pointed out that shortly after the seven Democratic senators sent the letter, the IRS targeted around five hundred groups associated with right-leaning terms such as Tea Party, Constitution and Patriot for additional scrutiny and harassment for details about their organizations.

“It effectively neutralized (these right-leaning groups), at least in 2012, and maybe in 2010, maybe going back a decade, we don’t know! Nobody knows, because nobody’s talking!” said Lewis. (Bold Emphasis Mine – READ the REST; Jason Lewis: IRS Scandal now an explicitly Democratic Party scandal; By Professor Wall; The Subsidiarity Times; 5/17/13)

Here is the CCC email writing of Al Franken’s involvement in the IRS Scandal and their request for funding to aid in Franken’s election defeat.

Today the Drudge Report published a Daily Caller news story which implicates liberal Democrat Senator Al Franken in the growing IRS scandal.  In 2012, as part of an effort to use the IRS to intimidate and silence conservative groups, Al Franken called on the IRS to target the tea party. 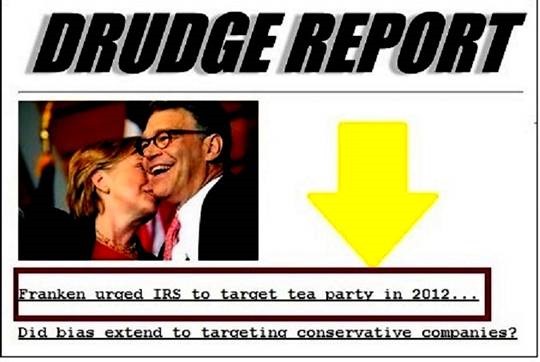 Franken co-authored a letter to the IRS along with a handful of other Democrat Senators demanding that the IRS target tea party groups applying for 501c4 non-profit status.  Then Franken spoke out at a press conference on March 21, 2012 where he told the media:

“I think that there hasn’t been enforcement by the FEC and the IRS… That’s pretty hinky.  I mean, they really aren’t doing that, and that I think there needs to be a look at that…”

Al Franken got his wish and the IRS targeted, investigated, harrassed (sic) and intimidated tea party organizations and other conservative groups.

Now it’s time to hold Al Franken accountable for his shameful actions of trying to use the IRS to conservative voices in this country.  It’s time we defeated Al Franken and ousted him from the U.S. Senate once and for all.  Please support our campaign to “Defeat Al Franken” and help us replace him with a constitutional conservative who will serve the people of this great nation, and not be a puppet for Barack Obama and his minions.

Barack Obama is heavily invested in Al Franken’s re-election for reasons that should be obvious by now, and we need your help to boot Barack Obama’s good pal out of the U.S. Senate. 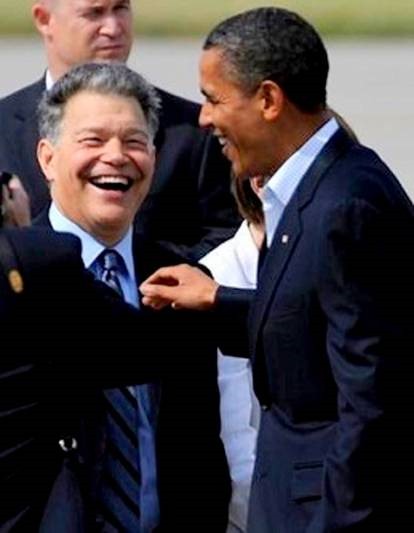 Let’s deprive Barack Obama of one of his most loyal votes in the U.S. Senate.  Support our campaign to “Defeat Al Franken” – CONTRIBUTE HERE.

Friends, we MUST defeat Al Franken in the upcoming midterm elections.

With Franken already amassing a warchest of over $2 million and launching his Senate re-election campaign, we here at the Conservative Campaign Committee are launching our TV and radio ad campaigns to “Defeat Al Franken” and we need your support.

You can also mail in a contribution to our headquarters here: