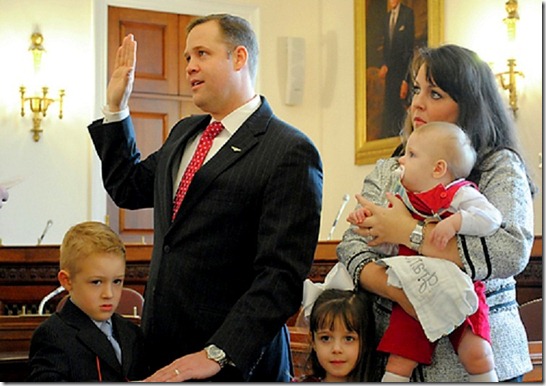 I live in Tulsa, OK. I voted for Jim Bridenstine in the GOP Primary that defeated long time District 1 Republican Incumbent John Sullivan. Sullivan was a Conservative but he tended to tow the line of the GOP Establishment.

I am gratified to know that the Congressman I voted for – Jim Bridenstine – was one of nine that had the cajones to vote to oust Speaker Boehner. I only pray when Committee assignments are handed out that Boehner recognizes an ouster movement occurred because of too much compromise with Leftist Dems.

Bridenstine 1 of 9 to vote against Boehner for speaker

WASHINGTON — Oklahoma freshman Rep. Jim Bridenstine, R-Tulsa, was one of nine Republicans Thursday to vote for someone other than John Boehner for House Speaker.

“We lost seats in the House. We lost the Senate. We lost the presidency. I just thought it was time for new leadership,” Bridenstine told the Associated Press.

Representing District 1, which includes Bartlesville and Tulsa, Bridenstine was one of Oklahoma’s two newest congressmen sworn into office on Thursday.

Also taking the oath were Markwayne Mullin and three other members of the state’s congressional delegation — Tom Cole, James Lankford and Frank Lucas.

Looking ahead to his first term, Bridenstine said it is “daunting” but “a true honor.”

Bridenstine upset longtime incumbent John Sullivan in last year’s Republican primary and went on to defeat his Democratic opponent in the November election.

He is a Navy pilot who had tea party backing when he was campaigning for the 1st Congressional District, which covers northeastern Oklahoma.

Earlier in the day, Bridenstine participated in a “mock” swearing-in ceremony with other members of the Oklahoma delegation. He was joined by his wife, Michelle, six-year-old son Walker, four-year-old daughter Sarah, and 10-month-old son Grant.

Mullin, who owns a plumbing business, won the open seat for the 2nd Congressional District that was vacated by Democrat Dan Boren, who decided to retire. That district stretches across 26 eastern Oklahoma counties.