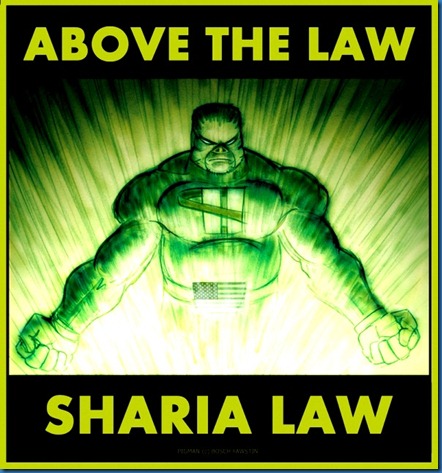 I first became acquainted with Bosch Fawstin during the time period the Muslim world was going flipping nuts over a series of Mohammed cartoons published by a Danish newspaper. Those Mo-toons were widely condemned by Muslims (Moderate & Radical), Muslim Apologists and Leftist Multiculturalists. The death threats and the fatwas began to fly via the Religion of Peace. Cartoonists had to go into hiding out of fear for their life. At the time I could see going into hiding if you lived in a predominantly Muslim nation but I was having a difficult time grasping the reason why a person in the West would have to go into hiding for exercising Free Speech. I mean the West is supposed to be the paragon of nations living by the rule of law rather than the rule of man. The law should be sufficient to protect a citizen by investigating a threat of death and arresting the person or persons involved in the conspiracy to commit murder, right?

These were the days I became aware that Europe had a sizable immigrant, naturalized, 2nd and 3rd generation Muslims. These Muslims who were supposed to be living in the West for a job or persecution relief acted in the same way as the Muslims in Islamic lands. The European Muslims went flipping nuts. I am not talking about a mere protest on the sidewalks of newspaper publishers expressing their Free Speech right of displeasure with the Mo-toon publications. I am talking about scary unruliness that added fuel to the death threats. How is a police force going to investigate tens of thousands (if not millions) of suspects that have a motive to murder?

What path did European law enforcement take? Law enforcement, EU and European governments chose to condemn the publishers with the hint of leveling hate-speech accusations rather than protect the right to Free Speech. This is when I discovered Islam is dangerous to Life, Liberty and the Pursuit of Happiness beyond a terrorist level but also on the cultural level. Islamic Supremacism demands a violent response to the perceived insult to Islam, their prophet Mohammed or to their Allah.

So then I ran into Fawstin’s Blogger site (he has more) and enjoyed the politically incorrect graphic novel pictures of anti-Jihadist Pigman. Have not really paid attention to Fawstin’s story. So now I have discovered he is an ex-Muslim motivated to drawing anti-Jihad toons as his form of Free Expression in the post 9/11 world we live in.

Political Islam has cross posted a FrontPageMag.com in which Fawstin writes about the thought that a small minority of Muslims are radical and most Muslims are Moderate. Fawstin who is an ex-Muslim expresses anguish that Muslims living in the West are not Islamic terrorists; however the Moderate majority does not actively get involved in condemning Radical Islam. Here are some teasers:

So while I understand that most Muslims are not at war with us, they’ve proven in their silence and inaction against jihad that they’re not on our side either, and there’s nothing we can say or do to change that. …

Another problem with Muslims who aren’t very Muslim is that they lead some among us to conclude that they must be practicing a more enlightened form of Islam. They’re not. They’re “practicing” life in non-Muslim countries, where they are free to live as they choose. But their “Islam” is not the Islam. There’s no separate ideology apart from Islam that’s being practiced by these Muslims in name only, there’s no such thing as “Western Islam”.

This is a good read from someone who is not squeamish about exposing his former faith. Read the article that I am actually posting from Political Islam because is who sent me the FrontPageMag.com article.

One thought on “Radical Islam is Islam”