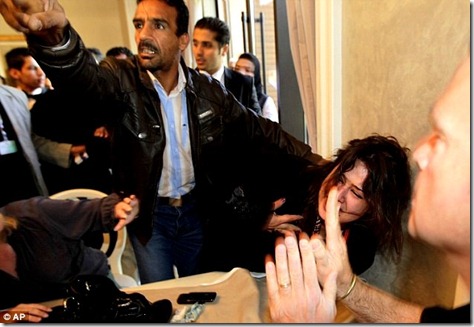 ACT for America sent an email that relates information about an interview between Bill O’Reilly and Wafa Sultan. The email says O’Reilly was schooled by Dr. Sultan. The first thought I had is that O’Reilly was being adversarial toward Dr. Sultan concerning Sharia Law and rape. Dr. Sultan wrote a book that exposes the dark nature of Islam entitled, “A God Who Hates” (This is a link to an Andrew Bostom discussion about Dr. Sultan and her book).

The riveting personal narrative of “A God Who Hates” makes plain that Wafa Sultan’s views have evolved, and she now posits that Islam itself is the bane of the global Muslim community, or “umma.” She argues compellingly that traditional, mainstream conceptions of the God of Islam, Allah, and his Apostle Muhammad, bear ultimate responsibility for the bellicose aggressiveness, intolerance, and misogyny that pervade Muslim societies. Indeed, the book’s central motif characterizes Islam’s Allah as the deceptively fierce ogre in an Arabian parable, raging from his mountaintop perch:

From where he sits, he raves and shrieks, filling people’s hearts with fear by threatening to gobble them up if they leave their homes or do any kind of work at all. The people terrorized by his shrieks, can live only by stealth. Only their survival instinct keeps them going. They steal out like mice in secret to gather enough to keep body and soul together. They live day by day, waiting impatiently for the moment of their death. The fear of this ogre has sapped their intellect and depleted their physical powers, reducing them to despair and hopelessness.

As you can expect Dr. Wafa Sultan has been the recipient of numerous death threats forced to maintain a low profile residing in America originally from Syria

I watched the video of the interview between O’Reilly and Dr. Sultan. Although O’Reilly was his usual abrasive self, I really didn’t see an adversarial exchange. What I saw was O’Reilly playing devil’s advocate to get clarification from Dr. Sultan on the evils of Sharia Law. The topic of the O’Reilly-Sultan interview was the rape of Iman Al-Obeidi a Libyan woman by Qaddafi thugs.

The fact is though that rape is condoned under specific circumstances in Islam, Sharia Law and particularly nations where an Islamic culture dominates. America needs to get on board with the handful of other States that have enacted anti-Sharia statutes, anti-Sharia State Amendments or are in the process of doing so.

Below is the ACT for America email followed by an Andrew Bostom post yesterday about rape inside of Islam.

Join 189 other subscribers
Follow The Conservative-Patriot Christian Right on WordPress.com