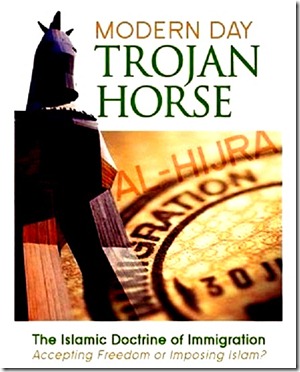 European nations have stuck their heads in the sand when it comes to immigration or political asylum from Muslim Middle Eastern nations. I believe Europe’s deal is if you have job skills you can immigrate to work. Or perhaps even if people with Islamist credentials are given political asylum because they are fleeing a repressive dictatorship (or even by Western standards a moderate Muslim nation) that might result in death if caught.

The leadership of Germany, France and the United Kingdom has finally come to the politically incorrect conclusion that putting faith in multiculturalism has become ruinous because national cohesion is becoming threatened. Of course I don’t believe anyone had the guts to reference Muslims but everyone knows who these leaders were speaking of.

The blogger at 1683 AD is promoting the idea that the immigration and political asylum policy of accommodating immigrating or fleeing Muslims should change especially with the upheaval spreading from Muslim Maghreb through the Muslim Middle East with grassroots activism threatening to bring the status quo down. The 1683 AD blog goes out of its way to point out that actual persecuted people that definitely are Islamists should NOT be allowed to immigrate or flee toward European political asylum. Although there are more examples the classic group allowed safe haven in Europe should be people like the Egyptian Coptic Christians and the Middle Eastern Assyrian Christians.

Residing in America, 1683 AD’s idea should also be implemented in the good old USA as well. I believe it is such a good idea that students from the Middle East should NOT be given student visas at least not until American hatred subsides. I mean a Saudi living in Texas on a student visa was busted with plans and charts to make a Weapon of Mass Destruction (WMD). The American-hating Saudi Muslim’s name is Khalid Ali-M Aldawsari. It is time for some good old fashion religious profiling before anyone from the Muslim world is allowed to enter America. When will America wake up from the stupor of political correctness when it comes to Islam?